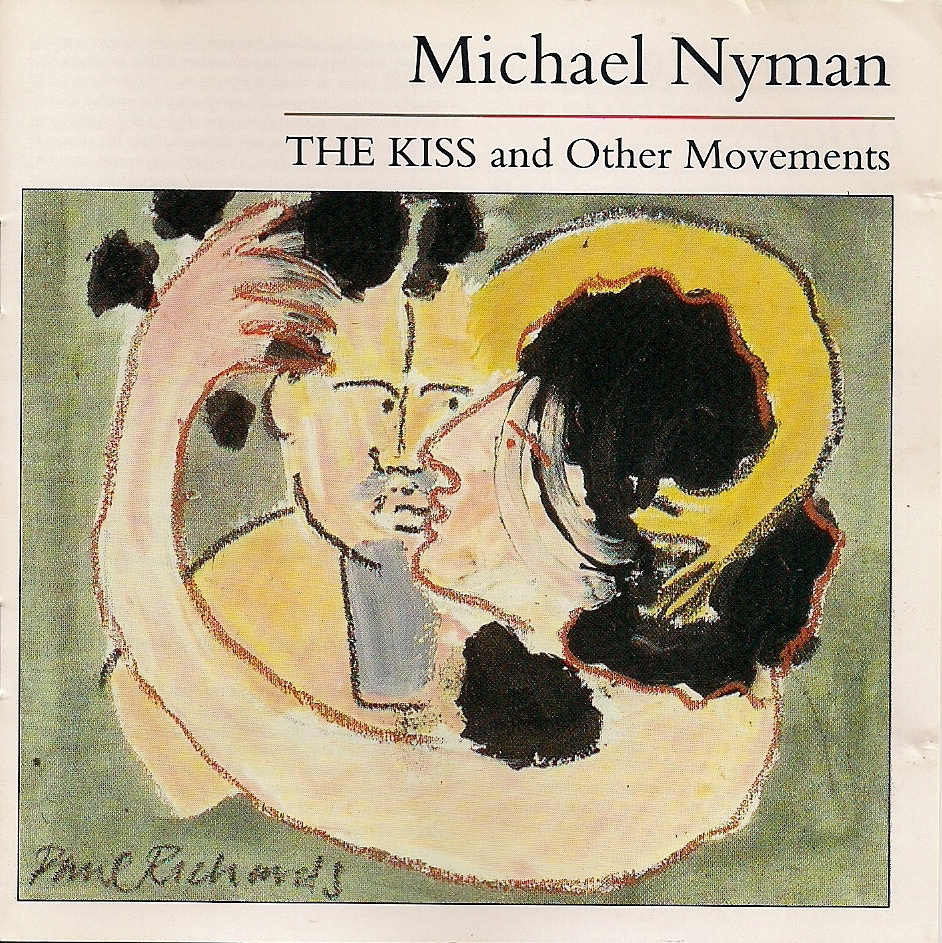 I do wonder if I would ever (knowingly) have come across Michael Nyman if I hadn’t met my wife when I did. She was fresh from a fine art and film degree from Nottingham University and was still very interested in the films of Peter Greenaway. The first one she introduced me to was A Zed & Two Noughts, a film focussing on the inevitably of death, amongst other equally appealing subjects, and indeed an ‘art’ film worthy of watching for film lovers or students – but it was the music, the soundtrack that immediately struck me. Classical at its very core but contemporary and relevant to modern life enough to pull the viewer in and keep them mesmerised, it just perfectly matches the screen action so much so that the film and the soundtrack are indistinguishable from each other. It is like the heartbeat, the rhythm of the film.

Imagine the movie, personified, going into Pete Townshend’s Lifehouse. The result would be the biorhythm and undulating classical melody of Michael Nyman.

The Kiss and Other Movements actually just pre-dates the soundtrack for A Zed and Two Noughts, both appearing in 1985, and includes the Channel 4 commissioned eponymous piece, The Kiss, and various other works including parts from Nyman’s unfinished Tristram Shandy opera. The collaboration with Greenaway was already being established here too, and this album includes music from one of the director’s early concept films, Memorial.

The album opens with The Kiss, which is described as an “operatic duet”. Violins rhythmically introduce us to the music, frantically at first and then slowing down later, but on the first listen I wasn’t quite prepared for the vocals kicking in after the opening few bars. A woman’s voice that wouldn’t be out of place on a Siouxie & The Banshees album or Hazel O’Connor track (or maybe even Patti Smith). It’s very evocative actually and describes the lovers in the Kiss moving this way and that, embracing and gazing at each other, before slowing down to match the pace of the violins. She gives way to the other half of the duet, accompanied by woodwind/organ, a male more traditional operatic voice. We then go back and forth between the two, all the while with that repetitive heartbeat of music rising and falling in the background. Repetition and rhythm are words you will use a lot when describing Michael Nyman’s writing. The track, I think, would be unremarkable vocally if not for the contrast in styles.

Nose-List Song follows and throws us into, again, a driving beating melody with a monotonal vocal which could easily be mistaken for a sequel to the Blackadder theme tune. Again, we are treated to the Nyman repetition, both vocally and melodically, but it is hard to describe really, and hard to review, as I think Michael Nyman’s music is totally unique. If you are new to this, you won’t have heard anything quite like it. If you are a Nyman fan, but new to this album, then you will not be surprised, but you will still be amazed at the extraordinariness of the tracks.

Miss the gap, and you could easily think the next track is simply an extension of the last. The same unmistakable biorhythm, familiar yet distinctive, but no vocals this time, which is, on balance, the norm for his music. Tango Between The Lines is a pretty piece of music but doesn’t really stand out amongst the other tracks, but it does cement into the first-time listener what Michael Nyman is all about. It reinforces the ideas and style you’ll come to adore.

Images Were Introduced again could not be written by anybody else. It’s difficult to portray that every piece of music by this man sounds the same, yet totally different, it has the same beat, the same life force. It is alive and overlaid with a melody that changes the mood and the emotions of the piece. It’s incredible, actually, and listening to this album again as I write has reminded me of what a talent, and yes an underrated, or at least not a popular one, Michael Nyman is. What isn’t immediately apparent is the high notes of the dominant ‘instrument’ are in fact being sung by Sarah Leonard, the English classical soprano and a favourite of Nyman’s. No words, just an incredible showcase of her upper range which is why Nyman wrote it, as well as to accompany Peter Greenaway’s Inside Rooms: 26 Bathrooms, London and Oxfordshire, 1985

The album closes with a 15-minute three-part piece titled Water Dances. The listener is immediately in familiar territory, here again is the life force. Here again is the beat. When I said repetition and heartbeat were oft-used words when describing this music, I was not lying! I love the opening to this, Stroking, and how a piece of music can make you feel like you are swimming and swirling in the water as this does is beyond me. It makes you smile because it is so joyous, you just can’t help yourself. Water Dances was written for Making a Splash, another early Greenaway film from 1984 which featured synchronised swimming as its subject matter.

Gliding, then, gives you goosebumps. It’s sublime. And again, close your eyes, maybe have a sip of wine, and you are there, gliding on the river. For three minutes you may as well be a leaf caught in the current and you might find yourself wishing, as I did, that it would go on longer. Or maybe even forever! But the final part, Synchronising, brings you back to reality quite abruptly and returns to the previous tempo and themes. It sounds like a conclusion, and it is, a fitting way to close the album off.

It was a real treat listening to this again, and I love that about a record collection. There was a reason you and I buy our records in the first place. They may lay forgotten sometimes, maybe only ever played once or twice before the next distraction comes along, but when randomly picked out and put on the turntable it reminds us of why we loved it enough to own it in the first place. This album will certainly not be laying forgotten from now on.

Does The Kiss & Other Movements prepare you for what is to come from Michael Nyman in the soundtracks to A Zed and Two Noughts and other Greenaway films and other later works? Well, yes and no. It certainly is a brilliant introduction, and I wish I’d heard it before A Zed and Two Noughts, but I have to say there is probably better to come.