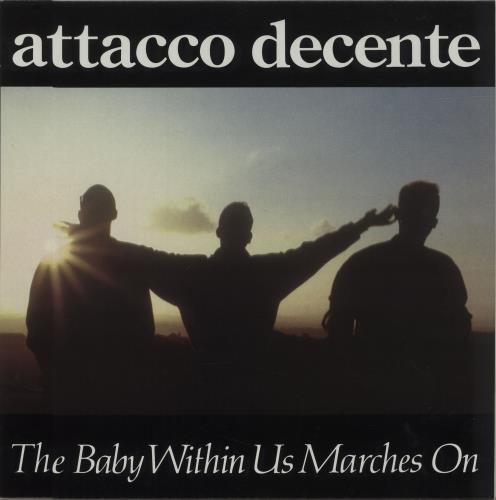 A difficult to describe band and quite obscure it seems, Attacco Decente were around from 1984 to 1996, a long enough time to have heard of them, you’d think.

The sleeve notes might give us a clue what to expect here – Flamenco Guitar, Attacco Harp (the harp, one assumes, that gave the band half of its name), Tiple (a plucked string chordophone!), Appalachian Dulcimer, 12-String Guitar and Penny Whistle. And that’s just one member, Mark Allen !

However, whilst that does indeed set us up for a flavour of what is to come, it didn’t prepare me for the Waterboys crossed with Gene vibe that the titular track threw out. The Baby Within Us Marches On is actually the last track on the album but for some reason I skipped to that one first, and if first impressions are anything to go by, then I’m glad I did.

Geoff Smith’s vocals really reminded me of Martin Rossiter from Gene, the passion and feeling and slight wobble that makes you really believe the words, like they mean so much to the singer. But let’s go back to the beginning.

The Will of One, the albums opener, starts with music and harmonies straight out of a Simon and Garfunkle song book, with driving percussion and an almost Tejano Street Band feeling. So Simon & Garfunkle esque is the track that you would be forgiven for thinking you’d stumbled on a long lost recording of theirs. The Will of One was actually released as a single but I can’t find any information on chart position for it so I can only assume it flopped commercially.

I think Fear of Freedom introduces the ‘Waterboys’ feelings for the first time, but there is an undertone of reggae here also, even as far as the ‘shouty’ (probably unfair) growl like lyrics over the music. The fact the listener is reminded of so many bands when listening to this LP (Fear of Freedom begins like an Abba track!) is due to the, dare I say disjointed style. I would be hard pushed to pigeon hole Attacco Decente in any one genre, but maybe that’s a good thing. They just seem like they don’t actually care about that and they are just enjoying themselves. That’s the impression, anyway.

More musical confusion across Don’t Join Their Army (60s folk meets tribal Africa) and then we’re into Gene vocal vibes and The Bully, with a riff and melody that could have graced any Proclaimers record. Natural Anger rounds off side 1 and, if you hadn’t realised it by now, cements the socialist, left wing agenda that has been driving through each track. There is a reason Billy Bragg endorsed this group, and I thought I remembered them as being part of Red Wedge in the Thatcher years, but apparently not.

Dad Was God and There Comes A Time are again a mish mash of styles. The latter sounding like an XTC track, certainly in terms of melody. In fact XTC influences have been there throughout – are you keeping up? I’m not sure I am, and as an album, it’s starting to slightly annoy me. Is it folk, pop, a stage musical, a street/reggae band? Individually, however, all the tracks are fine. Original (albeit heavily influenced as I’ve said – there’s even a Mod Revival/Northern Soul element to The Middle Ages) and they are definitely catchy. The Rose Grower continues to throw your musical mind all over the place, but not in a good way.

Like I said above, I am glad I heard The Baby Within Us Marches On first, because had I left it to last I think it would have been tainted by the rest of the album. Again, I should emphasise that each song is fine – I actually like them all, mostly, and I will definitely be listening to them again. They are obviously excellent musicians and have a distinct and unusual vocal style, but it just doesn’t gel as an album.

I will leave you with the title track below. Have a listen, and if you are not immediately reminded of about 3 bands they sound just like* then maybe I have wildly misjudged the whole LP!

* you probably needed to have grown up in the UK in the 80s/90s, or at least surrounded yourself with the music, to get the references.