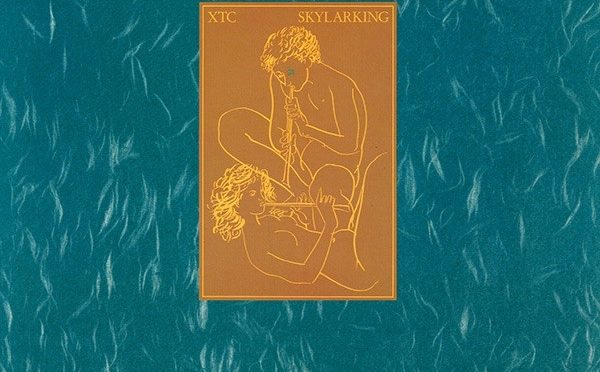 I’m going to make a bold statement right up front. You either really love XTC or you hate them.

A bold statement, as I say, but my experience tells me it is true – I have met in real life, and online, fans that share my absolute passion for XTC, and there are those who just don’t get on with the vocals, the quirkyness, the distinctive song writing style and actively dislike them. People are rarely on the fence about them.

So this is for the unlistened. If Skylarking doesn’t intrigue and leave you wanting more, then I’m afraid you belong in the ‘don’t get them at all’ camp and are a lost cause. If, however, your interest is piqued (as I am sure it will be) then you have a wonderful journey ahead of you exploring the discography of one of the best and most underated british bands there has ever been.

So to the record. Close your eyes, imagine laying on a rug in a field, mid summer. You can smell the freshly cut grass, the flowers, and hear the insects buzzing around, the crickets and barking dogs. It’s the English Summer perfectly captured in sampled sound and droning organ. Summer’s Cauldron is a perfect introduction to the album. It sets the theme brilliantly and you know something special is about to happen. The opener is actually based on a poem written by Andy Partridge, and it does indeed make you feel like you are drowning in the fluid cauldron of summer and you don’t really care about it. Please, don’t pull me out, this is how I would want to go.

The summer continues as we are seemlessly transported to the next track, Grass. I think the myth that this was written about cannabis is so cemented now in people’s minds that it may as well be true. I even believe it myself. But, apparently, this is simply about things Mr Partridge got up to at Coate Water, actually just down the road from where I am typing this review. As well as summer, we’re transported back in time, to our youth, our first love. Where else to take your girl/boy friend when you’re young and the sun is out. Lay in a field, make daisy chains, cuddle and mess around, and maybe make an excuse for a fumble!

Grass slows us down and keeps us in that ‘art rock’ mindset – a mile away from early XTC, guitar riff heavy punk/new wave tunes (all excellent in their own right, of course) and brings us sleepily back to the buzzing and tweeting of a Summer’s Cauldron callback before hitting it’s pop stride in the next two tracks.

Meeting Place and That’s Really Super, Supergirl are excellent examples of ‘guitar pop meets avant garde’ and they really pick up the pace. The latter is about all the girls in Andy’s life, all of which he considered worthy of superhero status for just being with him!

Back down again with Ballet for A Rainy Day and back to the artistic shoe gazing, the driving theme of the album. Continuing to what I think is a harrowing, darker rainy day track, 1000 Umbrellas. Lyrics emotionally delivered, almost shouting with frustration/fear shaking in the vocals. Side 1 finishes with the Beach Boys inspired pop track, Season Cycle and in my opinion the weakest song on the album. It should be noted that this was a very fractious album – there is a lot of anecdotal evidence that Todd Rundgren, the producer, did not see eye to eye with Andy Partridge. Indeed, Andy’s lyrics for Season Cycle were mocked by Rundgren and you can kind of see why, rhyming cycle with umbilical (pronounced Um-Bee-Lycle) – although for Andy and for XTC fans that probably seems perfectly normal!

Side 2 is where it starts to get really interesting – starting off with a familiar feeling XTC song on a familiar theme – Earn Enough for Us is about Andy’s time working in a low paid job with a shitty boss. Very relatable, he could have written this about me or any of my friends at the time. Moving on, with Big Day making marriage sound a little mournful – I can’t work out if its a pro or ante marriage song given it was written for his son, but it doesn’t really fit well with the rest of the side, or even the album. It was desitined to be a track on a Dukes of Stratosphere album, which may explain why it feels at odds with the rest here. It’s a nice track but interrupts the emotion of side 2 I think – takes you out of the moment and the warm, happy, romantic memories Side 1 gave you with Cauldron, Grass and Supergirl.

It’s a real reflection on Todd Rundgren that the next track, Another Satellite, was rejected by him. It was the executives at Virgin who could see past Rundgren’s objections and insisted it was included, and thank goodness. An absolute gem of a track and one I would play to somebody who asked me the question ‘What do XTC sound like?’ – it is XTC in essence. Not really like any other song of theirs but at the same time captures everything that makes them good. Lyrics, melody, musicianship, and slightly out of kilter with the world. It’s wrought with emotion, likely because it was written about an over obsessed fan who caused marital problems for Andy. A very personal track and it shows. Emotion is the real mother of invention.

Then on to Mermaid Smiles – I hate to use the word filler, it’s nice, pleasant, virbophones and bongos attempting to give it an Indian vibe, but failing. It’s a short, 2 minute ditty which leads into a stand out song and one I remember that made me sit, open mouthed, in front of 80s Uk music show The Tube when Jools Holland featured it in a Portmeirion/Prisoner special.

I’d never really heard anything like it before even though I’d been a fan of XTC for a while by then. My good friend’s father actually managed XTC for a while, Dennis Detheridge along with Ian Reed, so I was introduced to them early on, both musically and literally, meeting Andy and (I think) Colin Moulding at a ‘Battle of The Bands’ competition in Birmingham. But The Man Who Sailed Around His Soul still took me by surprise. Think of it as a song about the futility of existence and you won’t be far wrong!

That Skylarking didn’t do very well commercially in the UK wasn’t altogether surprising. XTC were never the most popular band, and this album was a departure even by their standards (in some respects) but the next track, Dear God, really caused a stir in the USA. It’s the one track non XTC fans have probably heard and never knew who it was by. Not at all controversial by today’s standards but back then an agnostic writing a letter to God questioning the crappy things he does caused a bit of a hoo ha in the States. It did well because of that, reaching 37 in the US Billboard.

It speaks volumes that VH1 in 2009 rated Dear God at number 62 in their greatest one hit wonders chart, depsite XTC having been around for years before and years after, and charting higher!

The depressing, existential theme continues with Dying and moves on to a really great ending in Sacrifical Bonfire, giving it a kind of Pagan optimism that you thought was lost after the last 3 tracks. Not exactly upbeat, but leaves you feeling at the very least like you may just want to flip the record over and get back to summer, bees and crickets, before the happy drowning sucks you back down….